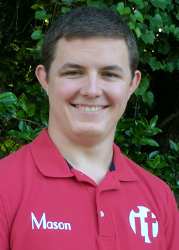 Mason Reid joined Business Resource Partners in April 2017, after completing his five year enlistment in the US Marine Corps. He brought with him his service dog Max, who took on the role as an office support team member. During his military career, Mason received specialized training in Information Technology services and repair,which he brought to the BRP.

Mason’s role within Business Resource Partners has expanded since he joined in 2017. In the second half of 2018, Mason has taken charge of Marketing, Social Media, and Sales and Networking. You have likely seen him and Max at the Lake and Seminole chamber functions in the past few months. In January of 2019, Mason teamed up with Stephanie to create another division, VRP (Veteran Resource Partners), providing pro-bono services to recent military veterans looking for help finding their way in the commercial world.